On Friday, March 22nd, the lobby of the Narragansett Towers became a Post Office for one day, on the first day of issue of the new stamp honoring Narraganset’s 125th anniversary, creating what stamp collecters call First Day Covers.

The celebration attracted a good-sized crowd throughout most of the day. Besides the First Day Issue event, there were displays of historical documents, vintage postcards, old coins and keys (from the many hotels of the gilded age), displays by South County Museum (who had a blown-up photograph of Narragansett Town Beach in the 1890s positioned so you could look past it and see today’s beach), a display for the Seaside Village Fair (coming up on June 8th), and more… There was also a display of high school student paintings and a concert by the junior high school chorus. All of which attracted quite a crowd.

And yes, of course your Narragansett Historical Society was there to provide an opportunity for people who are interested in Narragansett’s colorful history to join our organization.

Although the Post Office was only there on Friday, on Saturday morning the Easter Bunny turned out for the annual Easter Egg Hunt, thus bringing more families to see the exhibits.
A very popular attraction was a huge spectacular cake (from Patticakesri) featuring a large model of The Narragansett Towers located on an imaginary island surrounded by blue water and the seawall. (The Tower was decorative, the seawall and the island and the sea were all edible cake, enjoyed by the throngs of visitors. Even the picture post cards were edible (made of fondant with edible images.) 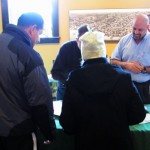 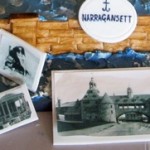 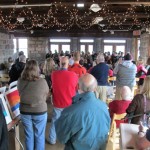 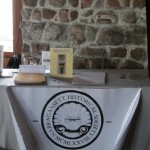 The society participated in the town’s 125th anniversay celebrations. 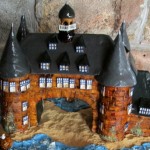